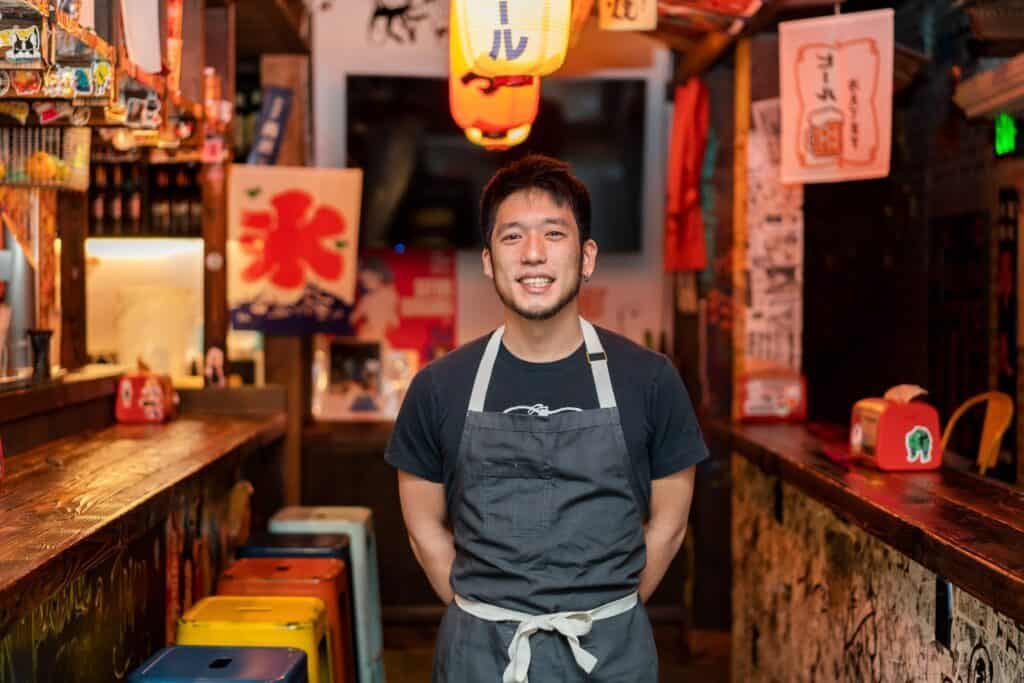 Long before he was a nationally recognized celebrity chef, a finalist and fan favorite on season 18 of Top Chef, and a James Beard Award semi-finalist, Shota Nakajima was just a Japanese American kid with a megawatt smile and more energy than he knows what to do with. To hear the Seattle-based owner of Taku talk about himself, he’s either on at warp speed, or so far off he's snoring in the corner. If you judge Nakajima by his on-screen persona—all fire and drive delivered with his signature infectious giggle—you may be surprised to find a stereotypical Pacific Northwest introvert, most at home in the woods with his dog, Dodger, foraging for mushrooms.

Indeed, he’s a lesson in juxtaposition: a wild success and a high school dropout, boy band good looks and a been-around-the-block worldview that belies his obvious youth. (To be fair, he’s 32, but he’s already put in 17 years in restaurant kitchens—you do the math.) That juxtaposition is something you’ll find true for Seattle as well: arts patrons who wear sweatpants to the ballet, food nerds who follow a tasting menu at Canlis with a burger at Dick’s, city folk who can’t get enough of the mountains and water.

"I think Seattle Japanese is its own culture," Nakajima says. "It's not Japan. It's not Seattle."

Seattle’s rich and complicated Japanese history dates back to the late 19th century. Its history with Japanese food specifically is nearly as old—Maneki, an anchor tenant in the city’s Chinatown-International District, has been serving Japanese cuisine since 1904. Teriyaki (Japanese in name rather than origin, but still) is the city’s signature dish. But Nakajima explains that until fairly recently, Seattle’s interpretation of Japanese cuisine was fairly narrow in scope, limited to old-school sushi spots—many popularized by octogenarian sushi chef legend Shiro Kashiba—and American-Japanese fusion dishes.

Born in the Seattle area, Nakajima spent a childhood begging his mom for Lunchables, then sitting down to a home-cooked ichiju-sansai every night. He spent junior high in Japan, where local kids made fun of his American accent. By the time he'd fallen in love with life there, he was back in the States—and realized "all I wanted to do was rep Japan," he says. So he quit high school in favor of education through experience, in Japanese restaurants here, then training in Osaka.

When Nakajima opened his first Seattle restaurant, Naka, in 2015, he was dedicated to a fine-dining kaiseki menu—many courses of intricately prepared Japanese dishes highlighting Pacific Northwest ingredients at peak seasonality—with nary a nigiri in sight. "Naka was a statement in America for me," he says. "When I opened Naka, even though I was getting press back-to-back, people still didn't understand Japanese cuisine as something other than sushi. We used to have people come into the restaurant on a Friday night and walk out because we didn't have a California roll. Or when they requested the bar, we'd explain to them that we only have an alcohol bar and not a sushi bar—that they're going to be sitting in front of a bartender and not a chef. Someone had to do it first. And that was a big thing for me: I was like, I'm going to do it first because someone has to.”

Naka always struggled to find its audience (though, editorial note, Nakajima’s food there was next level amazing). He ended up pivoting to a slightly scaled down version he renamed Adana in 2017. In early 2020, just days before the stay-at-home order forced restaurant doors closed for months, he opened a dark, sexy, anime-decked bar/restaurant called Taku; mid-year, he closed Adana for good.

In the years since Naka opened, Nakajima has grown up and moved on; so, too, has Seattle’s Japanese food scene. Now, it’s fairly easy to find specialized restaurants dedicated to udon, soba, katsu, okazu pan, conbini-style sandwiches, and more, all interpreting Japan’s varied culinary landscape through a distinctly Seattle lens.

"I think Seattle Japanese is its own culture," Nakajima says. "It's not Japan. It's not Seattle." In many ways, like the chef himself. Here, he takes us through five meals at his five favorite Japanese restaurants. 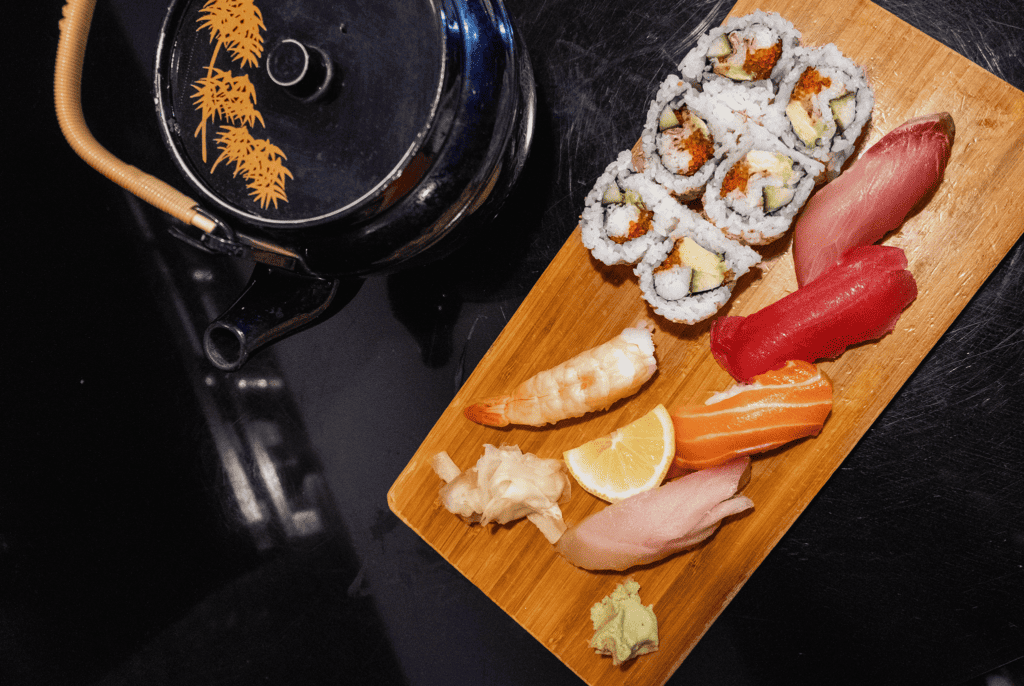 At 16, freshly dropped out of high school, Nakajima was hired at a modest sushi restaurant in the Seattle suburb of Bellevue, where he spent long hours peeling onions and washing dishes. "It's still the same Guatemalan family in the back," he says. "When I go, they're like 'Shota! Come wash dishes!' They're the guys who taught me how to work really hard."

Kiku is still one of his favorite spots for sushi, somewhere he sends friends for quality fresh fish at a fraction of the Seattle price tag.

"[Chef/owner Tadashi Sato] is a very old school sushi chef," Nakajima says. "His product is so good. He's very specific about his nori, his rice. If you just sit down and eat and talk to him about sushi, he will talk about sushi forever. He's just a giver—he gives so much to the people and the community around him, to the point where he'll sacrifice himself." 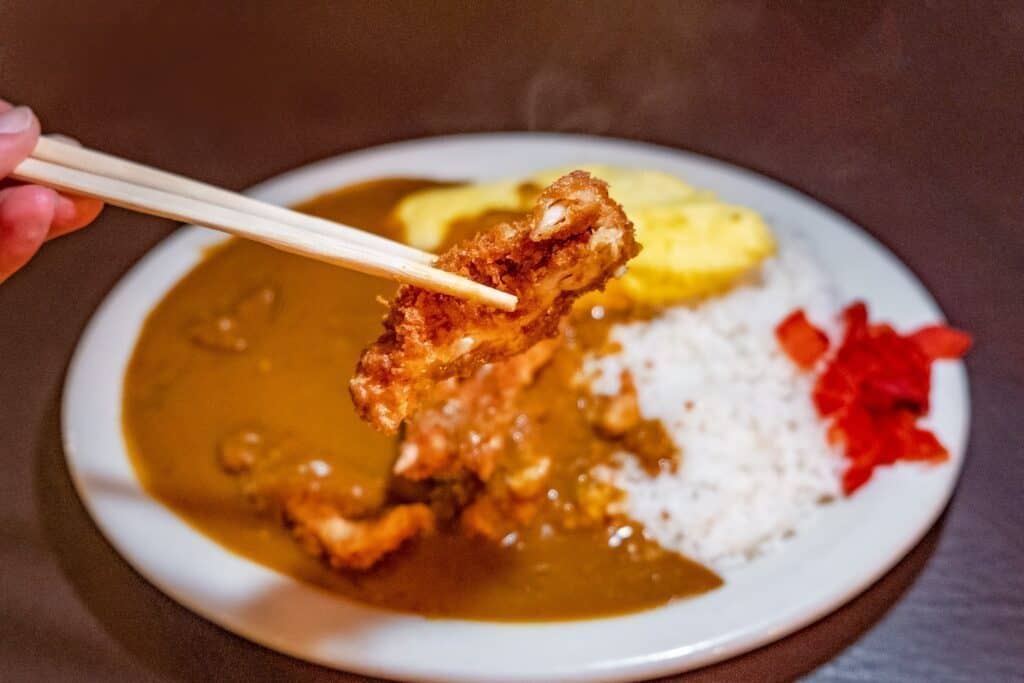 Katsu curry (with an omelet)

It's not much to look at, but Nakajima says this Japanese-style diner is an International District staple—equally popular as a "good ol' dive bar" for patrons in their 20s and a lunchtime hangout for their parents.

His order: beef curry, served with katsu and an omelet. "I don't think anyone makes Japanese curry from scratch," Nakajima says. "There's no need to. Honestly, those roux packs are so good! Sure, you could make it from scratch, grind spices, everything fresh, and it's delicious. But for the price you can charge in Seattle for a bowl of curry [edit note: $11, apparently], trying to do that wouldn't make sense financially. I love curry—maybe I'll open a curry restaurant someday." (Please, do.) 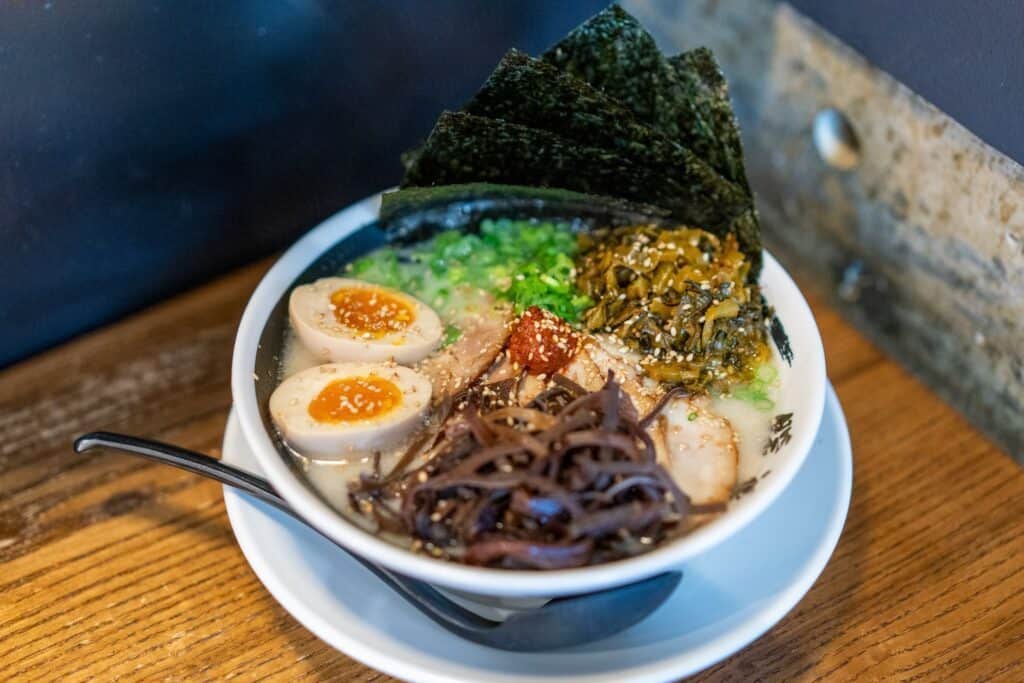 Seattle's ramen scene, which has exploded in the last decade, is populated by both popular Japanese chains and local one-offs putting a personal spin on the popular comfort food dish. Nakajima's favorite, the shio ramen at Fukuoka-style ramen chain Ramen Danbo (which has other locations in Vancouver, B.C., and New York), is as much about quality as it was about proximity; the Capitol Hill spot is just a block from Adana’s former location.

"It's very Japanese—the way you order your noodles thick or thin, firm, soft, or standard. Those options are a very normal thing in Japan, and it's nice to see that on menus here," he says. "Plus, I love the slurp. You're supposed to slurp ramen noodles! How ramen noodles work, they're either thin so they catch the soup or thick and curly so they catch the soup—you can't have thick and straight, that's not ramen. That's why you have to slurp—if you eat it, it's going to be too hot. But if you eat it slow, the soup will fall off. So you're supposed to eat the noodles and soup together by slurping it quick. And in Japan, it's a compliment to the chef, if everyone's slurping and not talking. That means the food's good." 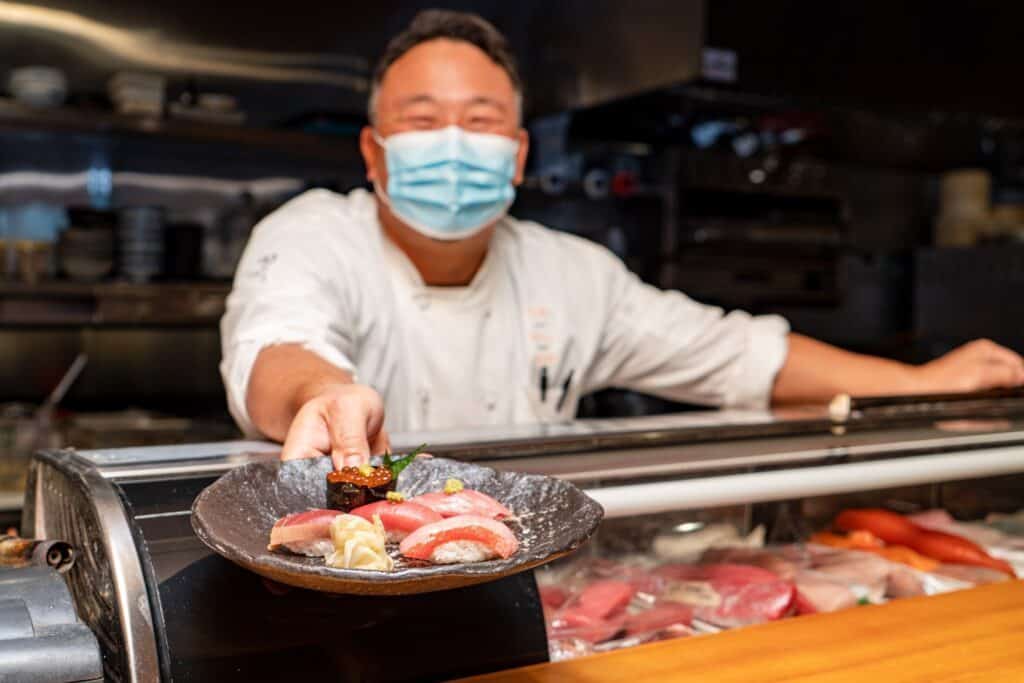 Another stop on Nakajima's resume, this Eastlake neighborhood sushi restaurant is a destination for both an omakase populated by local, sustainable seafood, and the hospitality it's served with. Go for the sushi, stay for the show by chef/owner Taichi Kitamura.

"Taichi is the best," Nakajima says. "You can't see his smile now with the damned mask on, but you can still see it in his eyes. Sushi bars are a bar—you go to interact and watch, and that's the fun part of it, right? I worked counter service my whole life, so I was always taught that you're on a Broadway show—everyone watches you—so your movement and your attitude is part of the experience people pay for."

And then there's the quality of fish: "Don't get me wrong, fish from Japan is delicious. But Taichi takes his time to get to know the fishermen here, the locals here, and go out fishing with them to learn about the industry. A lot of sushi chefs in Japan do this, but not a lot of Japanese chefs here do. Not because they don't want to, but because they have the language barrier."

Where most top-tier U.S. sushi spots fly premium fish in from Japan, Nakajima points out that what you gain in quality, you lose in local flavor. At Sushi Kappo Tamura, you'll dine on Pacific Northwest finds like smelt and black cod instead of bluefin. "That's why I like recommending it," he says, "because you'll get to try things that you can only get in Seattle." 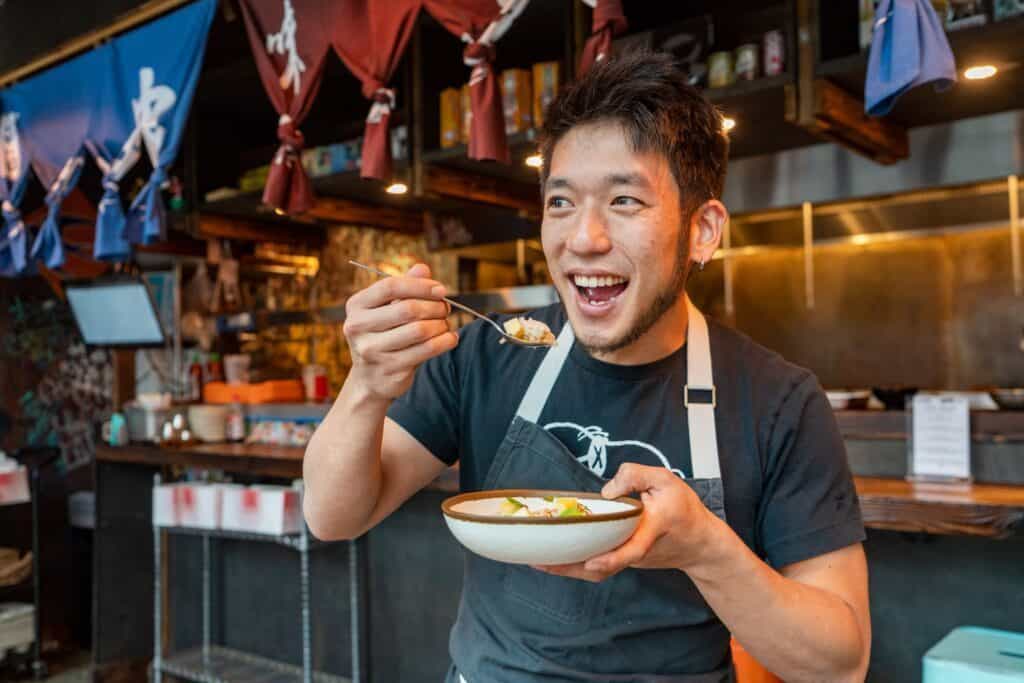 Here's the thing: Nobody's going to Taku for dessert. Nakajima’s so-cool-it-hurts restaurant/bar is a temple dedicated to fried chicken and alcohol, the most holy of unions.

But if you load up on karaage and forgo the rice pudding, you're missing out on the dish Nakajima is, perhaps weirdly, most proud of. "It's the first vegan recipe I've ever developed, and it's delicious—I promise!" he says. "Coconut milk, a little bit of coconut cream, some fresh cardamom…" and the most important ingredient: the leftover rice from a night's service that he doesn't want to toss, but can't in good conscience serve guests the next day. It's a teachable moment on sustainability to his staff, Nakajima says.

"Also, my whole life, I have never left a grain of rice in a bowl because I would get yelled at," he says. "If I try to do that in front of my grandpa, still to this day, I can't say it in an interview but… he's not cool with that." 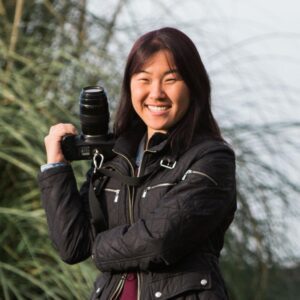 Suzi Pratt is a photographer and video producer based in Seattle. Her passion is to tell visual stories about people, places, and experiences. When she's not shooting with a camera, you can find her talking about cameras on her YouTube channel. 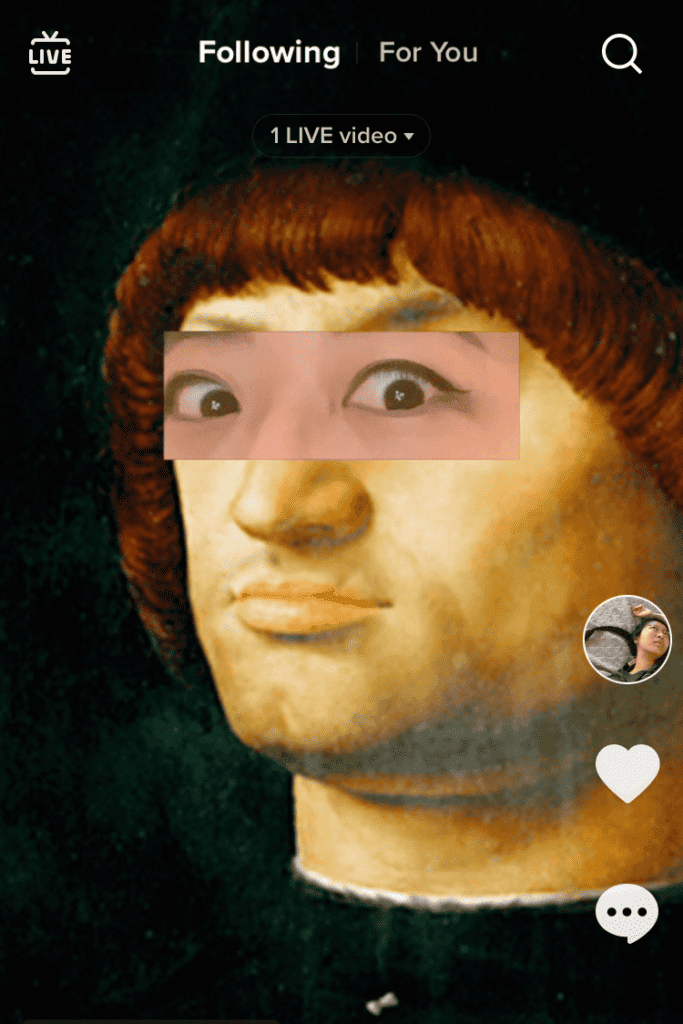 10 AAPI TikTokers not to miss 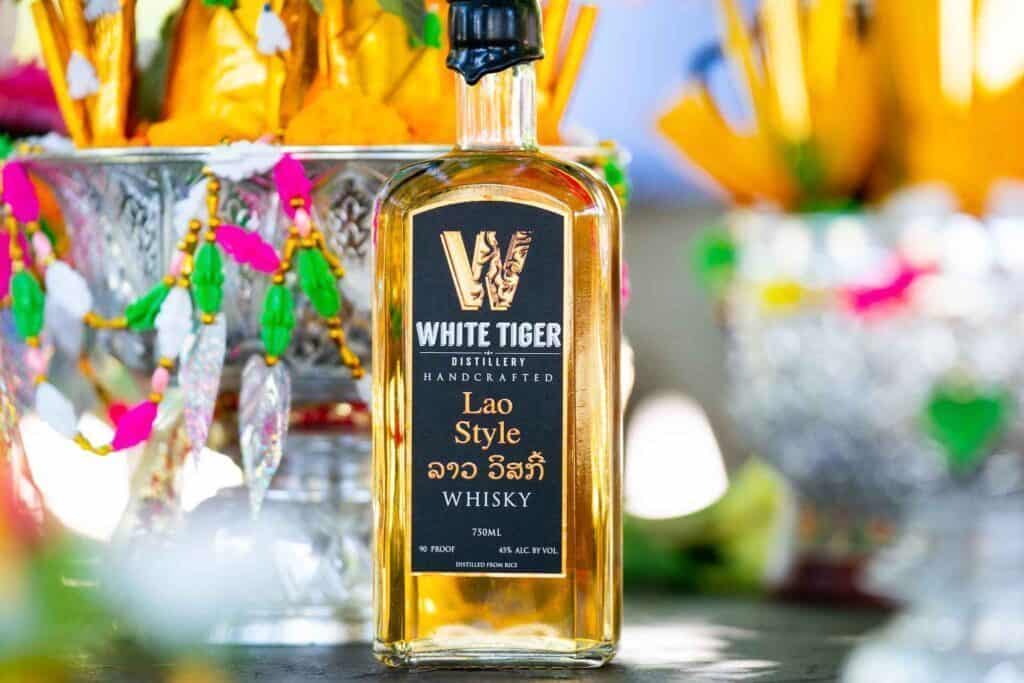 The Next Great American Brown Liquor

Have you heard of rice whiskey? Look to these Asian American purveyors paving the road stateside