The cast of “Glass Onion: A Knives Out Mystery.”

A timely, winding murder mystery with a glimmer of mischief in its eye, Rian Johnson’s Glass Onion: A Knives Out Mystery—the sequel to his 2019 whodunnit, Knives Out—is as just as slick as its predecessor, but it has no interest in re-treading familiar ground. Daniel Craig returns as the world-famous Cajun detective Benoir Blanc, alongside yet another high-caliber ensemble playing wealthy, obnoxious characters you love to hate, but this conceptual similarity is its only major overlap. The setting, the structure, even the nature of the central mystery are all wildly different this time, and though the film’s final act loses a bit of steam, this is owed, at least in part, to its unexpected shape as an anti-mystery of sorts, where the playful journey is so much more rewarding than the final destination.

The film received a limited theatrical engagement from Netflix this past week, ahead of its streaming release on Dec. 23. Its impressive $13 million Thanksgiving opening on a mere 600 domestic screens (compared to the wide release of Black Panther: Wakanda Forever on more than 4,200) has led industry insiders to question the release strategy. Some say it could have raked in as much as $200 million with a more traditional rollout—if not as much as its predecessor’s $300 million. However, while the lack of widespread screenings may be disappointing, it’s the kind of fun, tightly wound genre romp that’s worth adding to your queue once it debuts online next month.

Each tongue-in-cheek flourish feels executed to giddy perfection, even if it’s ultimately in service of an anti-one-percenter catharsis that doesn’t fully land.

Gone is the old-money affluence of Knives Out, Johnson’s Agatha Christie-esque yarn with some modern politics tacked on, which begins with a murder in need of solving. Instead, he updates the Christie detective story much more concisely, both by keeping you guessing as to the nature of the mystery itself, and by taking satirical aim at crass tech moguls, influencers, and the likes—a number of broad but distinctly modern stock characters (several of whom he reveals to have surprising depth as the film goes on). He also plays much more overtly with narrative point-of-view, in ways that would feel like “cheating” in most other films. But in Glass Onion, it’s all part of his cinematic pastiche. Each tongue-in-cheek flourish feels executed to giddy perfection, even if it’s ultimately in service of an anti-one-percenter catharsis that doesn’t fully land.

The film begins by introducing a series of seemingly disparate characters, each of whom receives a mysterious wooden puzzle box they need to solve in order to access the message inside. WandaVision’s Kathryn Hahn plays Claire Debella, a Connecticut governor running for Senate, whose nominally progressive politics seem to clash with the presence of her anonymous billionaire backer. Hamilton original Leslie Odom Jr. plays Lionel Toussaint, a breakthrough scientist at a giant tech conglomerate, whose projects are at the mercy of ridiculous faxes from his ambitious boss. Rom-com extraordinaire Kate Hudson disappears into the role of Birdie Jay, a supermodel turned influencer who holds on to the past, has a habit of putting her foot in her mouth online, and depends on her dedicated assistant, Peg (Jessica Henwick), to put out everything from PR fires to actual fires she sets by accident. Rounding off the quartet who are excited to receive the box is wrestler-turned-Guardian of the Galaxy Dave Bautista, as the macho Twitch streamer Duke who, along with his younger girlfriend Whiskey (Madelyn Cline), puts out half-baked videos supporting Men’s Rights and traditional masculinity. 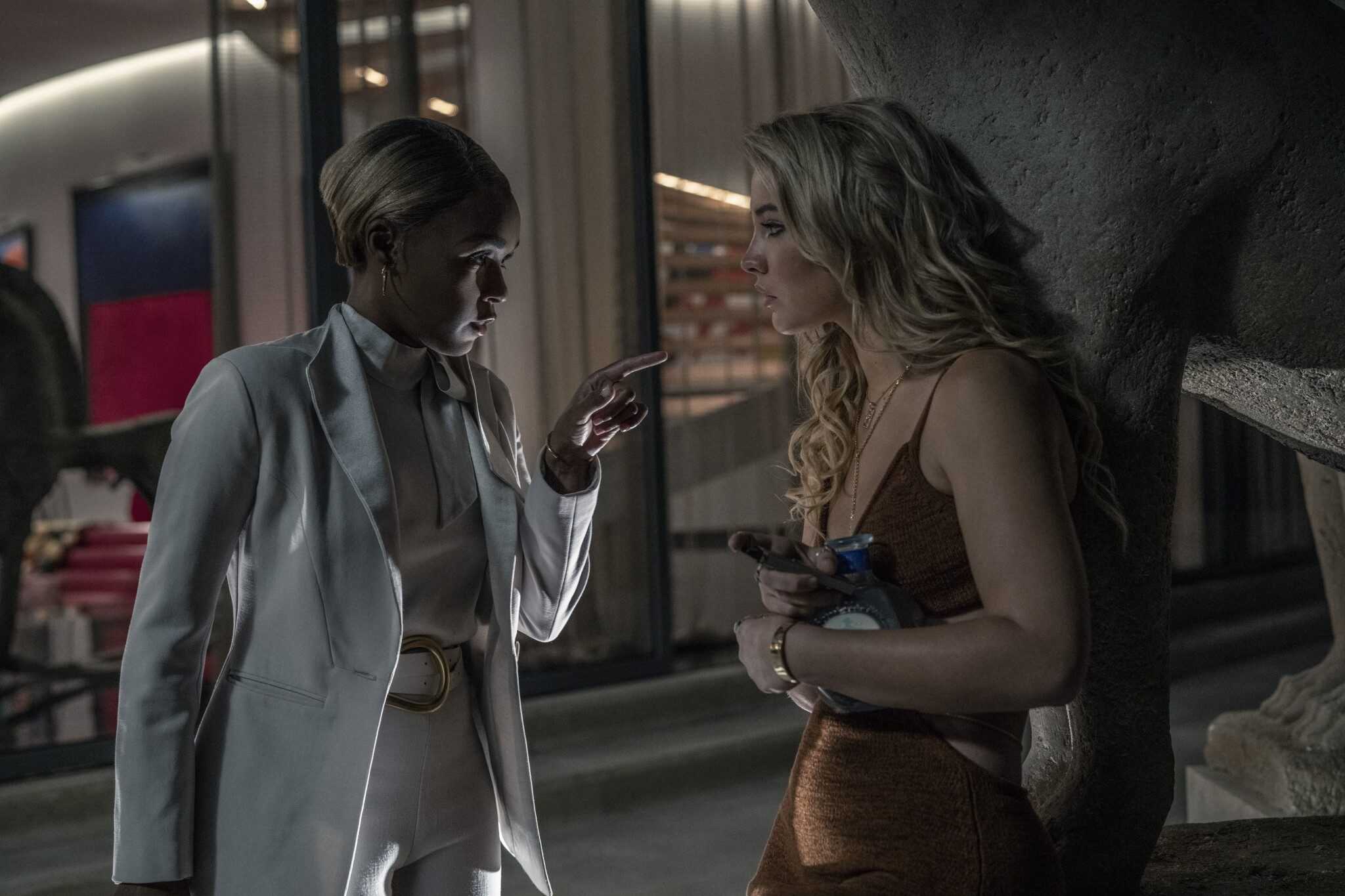 Janelle Monae (left) and Madelyn Cline in “Glass Onion: A Knives Out Mystery.”

These four people, from four vastly different worlds, quickly and inexplicably get on the phone with each other to excitedly talk through their puzzles, thus revealing a decade-old connection between them and the sender, tech mogul Miles Bron (Edward Norton). He’s using these boxes as a fun way to send his friend group invites to his private island in Greece, for a weekend-long murder mystery game in which he’s the victim, and for a long-overdue catchup after lockdown (the film is set during the first year of the pandemic, pre-vaccine, though this hasn’t stopped Birdie from throwing crowded parties).

There also appear to be two more boxes. One was sent to a person who was expecting the invite, but whom the rest of the group didn't think would show up: Cassandra “Andi” Brand (a fearsome Janelle Monae), Miles’ ex business partner and the group’s former friend, with whom they’ve all had an ugly falling out. The last person to receive a box, however, wasn’t expecting to be invited at all, because he’s a stranger to the group: Blanc, on whom the pandemic has been especially tough, leaving him with few cases to solve. So, he jumps at the opportunity. While it isn’t initially clear why he’d be eager to crash a murder mystery game (rather than solve an actual case), the film’s unraveling of the group’s connections slowly unveils something more sinister than a weekend of role play: someone might be trying to murder Miles for real.

The film reveals layer after layer of motive for a deadly crime that eventually unfolds, but a crime whose underlying methods and reasons are actually shockingly simple and transparent when things are all said and done.

Most of Glass Onion plays out on an isolated, high-tech island, at the center of which stands a lavish, futuristic mansion filled with expensive antiquities, and enough champagne to fill the Ionian Sea. It’s littered with gardens and pools, and adorned with an actual glass onion at the very top, a bulbous dome housing Miles’ private office. There’s a little more to this structure—it was built as a nostalgic tribute to the dive bar where the group first met a decade prior, known as the Glass Onion; their connection is sentimental—but really, the title is reverse-engineered from Johnson’s penchant for British rock (“Glass Onion” is the name of a Beatles song; “Knives Out” came from Radiohead). However, the idea of a “glass onion” is also the conceptual Rosetta Stone for how Johnson spins his tale. The film reveals layer after layer of motive for a deadly crime that eventually unfolds, but a crime whose underlying methods and reasons are actually shockingly simple and transparent when things are all said and done. Johnson’s main objective is to poke fun at this collection of wealthy airheads, yet he offers each of his duplicitous targets at least some shot at depth or redemption (if only to reveal how secretly miserable their lives are, despite their enormous wealth). Edward Norton in “Glass Onion: A Knives Out Mystery.”

His presentation of the plot can be complex, too, though perhaps “complicated” is a more fitting descriptor. There’s little nuance or complexity to what he’s trying to say about new money in the modern age, and he’s hardly subtle about which recently-in-the-news billionaire Miles is meant to parallel. However, the film is rife with winding layers that twist around far enough to form a narrative ouroboros. As Blanc snoops around the island for clues about each character’s potential motive, the film presents what appears to be complete scenes, but Glass Onion isn’t as forthcoming as it first appears. In the vein of a puzzle game, it turns out some pieces are actually missing from the film itself, though given the way it’s edited and staged, these are nearly impossible to clock until Johnson revisits several scenes and exchanges later in the film, filling in gaps where you wouldn’t have expected them in the first place. Granted, this makes watching the movie feel less like playing a game—the way most murder mysteries tend to feel, with viewers or readers generally being given all the pieces, even though the solution isn’t immediately clear—and more like watching someone else explain how they solved a Rubik’s cube behind their back. And yet, Johnson’s deviously clever filmmaking still makes Glass Onion oodles of fun to watch.

We may be watching a puzzle solve itself rather than being an active participant, but its mechanics are always dazzling.

Each scene, each interaction, and even each movement has a sense of zany, musical finesse, given how precisely it’s blocked and timed. We may be watching a puzzle solve itself rather than being an active participant, but its mechanics are always dazzling. During key set pieces, cinematographer Steve Yedlin immerses the characters in darkness, with light hitting them only briefly; the scenes in question are propulsive, but keenly focused, given the precision with which Johnson moves both his frame and his actors. It’s an intimate magic trick, meant to draw and divert your attention with expert timing. Each cut and camera movement leads seamlessly into the next, as the scene builds in intensity. You may as well be watching falling dominoes, or a Rube Goldberg machine. Before long, Johnson’s murder mystery makes a brief transformation into a ’roided out neo-noir, though it quickly returns to its status quo, and eventually becomes a little too preachy for its own good. Johnson’s objectives are certainly noble—he hopes to lay bare the hypocrisies and pretensions of modern opulence—but rather than applying his clockwork filmmaking approach to this end-goal, he depends almost entirely on observational dialogue, rather than behavior, to really hammer home the point.

Rather than applying his clockwork filmmaking approach to this end-goal, (Johnson) depends almost entirely on observational dialogue, rather than behavior, to really hammer home the point.

It is also, admittedly, a little difficult to become fully invested in the story. Benoit Blanc is no Hercule Poirot—Glass Onion doesn’t have the intense emotional baggage of this year’s Death on the Nile adaptation, and there are only hints of Blanc’s personal life via his domestic partnership—but the film is never once boring, and it’s consistently funny, too. It’s also the rare piece of modern media where ceaseless pop culture references and recognizable cameos aren’t just a lazy affect. Rather, they’re a fitting background detail for these specific characters, who pride themselves on where they stand in the global celebrity hierarchy. One joke in particular, stemming from an exchange between Peg and Birdie about sweatshops, has easily the funniest punchline this year; it’s a joy to experience with an audience, which is yet another reason Netflix’s truncated theatrical release feels like a miscalculation.

The characters in Glass Onion are always a hoot, whether their actors are playing farcical, two-dimensional versions of them, or whether Johnson is providing brief windows into what truly drives them, and what lies beneath their gaudy façades. There may not be much worth finding beneath the surface, but the process of searching is enjoyable enough. 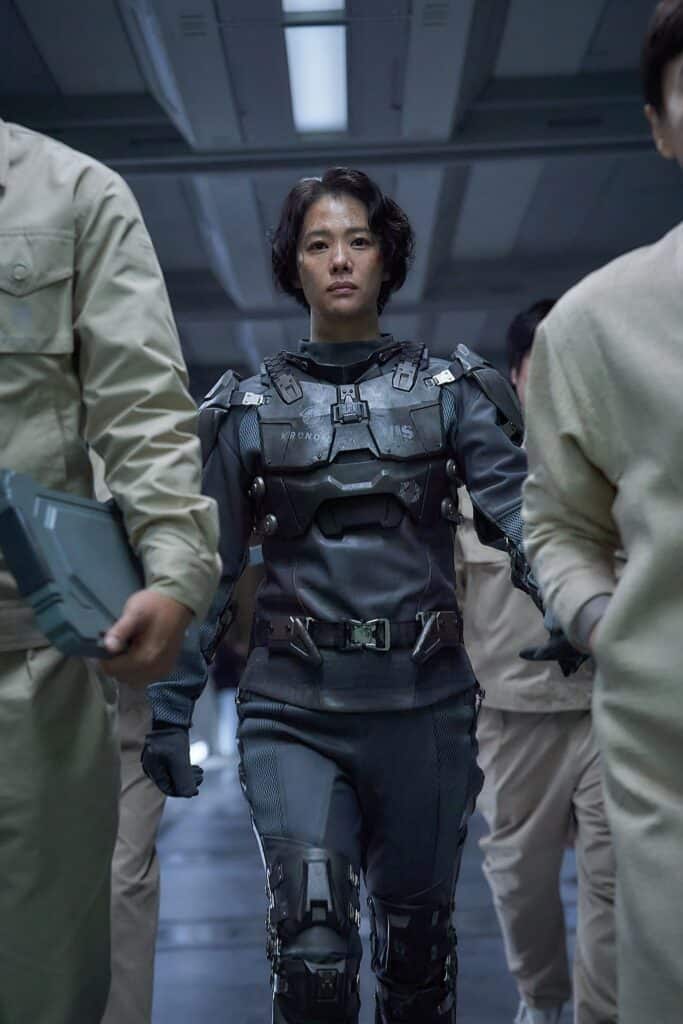