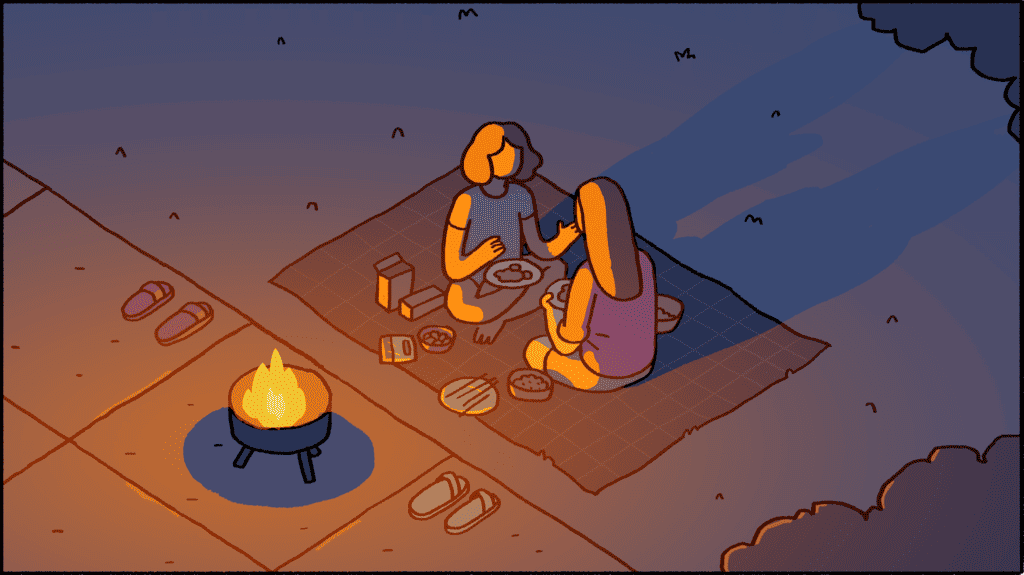 Mixed Love: The Firelit Sanctuary in a Cold White Town

In the New England town where few bother to see them fully, two immigrant girls found warmth by their backyard brazier 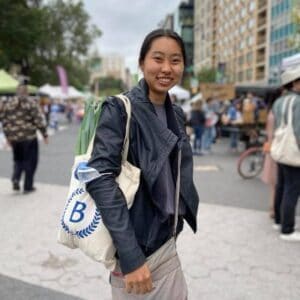 Mixed Love: A JoySauce column about interracial/intercultural relationships within the Asian diaspora experience, and how these unique love stories make our lives fuller, funnier, and more interesting.

Do you have a love story—with a partner, a coworker, a neighbor, your favorite barista—to share? Send us an email!

In summers, as the sun slipped below the horizon, I used to scooter to my best friend Elisha’s house. We would plonk a squat black iron brazier on her backyard patio, dispatch her little sister to find dry sticks in the yard, and tear up strips of newspapers and used paper bags for kindling. Inside the house, we loaded up on snacks—everything from mozzarella balls to samosas to naan to dumplings—and carried them outside on trays. With our buffet assembled, we lit the paper scraps with a flick of the lighter, fanned them with a notebook until they caught the surrounding sticks, and the entire brazier burned.

Enchanted by the crackle of popping bark, illuminated by glowing sparks like tiny fireworks, and hugged by the fragrant, acrid smoke, we talked about things we had long kept hidden. This fire-lit space was our sanctuary within the white, wealthy town where we lived, where not being white meant constantly being passed through a white medium, like distorted light beams through frosted glass. It was no wonder we always felt the need to protect ourselves and hide. No wonder that, though I knew Elisha for nine years, it took five years to lower our guard and trust each other, to build the kindling that set our summer evenings alight.

When the sky dimmed into darkness, everything beyond the radius of the fire’s warmth—the racism, the judgment, the awkwardness, the hostility—all melted away, and we could finally say all the things we had been holding back.

Our fire: a communion of culture, a connection fueled by trust. A friendship sealed with flickers of flame.

This fire-lit space was our sanctuary within the white, wealthy town where we lived, where not being white meant constantly being passed through a white medium, like distorted light beams through frosted glass.

Elisha is Pakistani, and I am Chinese. We both love to eat, as we both come from food-loving families and homes filled with the irresistible aroma of daily home-cooked meals. Our fireside evenings inevitably included food adventures, and they were as chaotic and unorthodox as we were. We skewered everything we could get our hands on, and roasted them over our fire with pyromaniacal glee. Cheese that melted and globbed onto the wood like drops of molten glass. Blueberries and strawberries, which exploded like tiny bombs. A halal marshmallow was sacrificed to the flame for scientific reasons. (It also exploded.) Tteokbokki accidentally baked for so long that the tiny rice cakes charred, and when we  dipped them in gochujang sauce so spicy, even Elisha’s Pakistani family choked from the heat.

We reveled in snacks from all over, but we most loved sharing our own foods: the cultural foods we grew up on, the foods we always returned to, the foods that filled us with excitement by scent alone, but that we’d never before deemed worthy of sharing with someone unfamiliar. One night, as we sat on a picnic blanket with heaping plates of homemade biryani, Elisha hesitantly asked if I wanted to eat with my hands instead of presenting me with utensils as usual.

I nodded eagerly. Though we had shared many meals at her house, up until then, I had only seen her eat with utensils. Having never eaten a full meal with my hands before, I ungracefully closed my fingers around a clump of rice, and messily lifted it to my mouth like a toddler. Elisha choked down a laugh.

“Let me show you,” she said, pinching her index and third finger with her thumb. Scoop. “Bring up to your mouth. Push with your thumb, so the rice slides in as if it’s being nudged off a conveyor belt. And most importantly: savor.” She grinned as she watched the food disappear into my mouth. “It’s delicious,” I said, sucking the flavor off my fingers, the words not quite doing justice to my delight.

“I’ve never shared this before,” she said as we ate. I nodded. Without needing to discuss it further, I understood. Centuries of racism shaped the Western stigma attached to something as simple as eating with your hands, the silent, corrosive judgment that renders it vulgar to your white neighbors. I understood having to keep home and public habits separate.

I too was unaccustomed to sharing. I had never shared the chive dumplings my mom made from the lush long stalks that crowded our garden. I had told no one about my love for fish eyes plucked from steamed whole fish, or for thick, chewy scallion pancakes layered with honey.

Before Elisha, I had never considered that someone in our small New England town might be interested in the food I ate, food that barely reflected what mainstream American culture understood as Chinese. After all, the white people I met who claimed to love Chinese food always fixated on the same repertoire: orange chicken, beef with broccoli, fried rice, maybe noodle soups or dim sum if they felt particularly worldly. The expanse and diversity of Chinese cuisine totalized within a few plates.

But Elisha listened as eagerly as she spoke, excited to try everything I described—even the fish eyes. In return, I closed my eyes and imagined the foods she spoke of: crisp honey paratha with butter, the crunchy pani puri she preferred over soggier ones, the streetside chai served on a sweltering day. Even at that age, I realized how rare this mutual curiosity really was. And so, I didn’t dwell. I pressed three fingers together. I scooped. I savored. And we shared a smile.

I loved the way her eyes lit up when she says mmmmm, chatpato, her lips slightly smacking, after eating a delicious meal.

In the early days of our friendship, neither of us knew these basic background facts about each other’s Sindhi and Northern Chinese heritage. Silence was our camouflage, the talisman that warded off judgmental remarks and uncomfortable questions that came with visibility. In silence we fretted about preserving our languages, which we couldn’t speak—or speak of in public. Neither of us felt the desire to assimilate, but the expectation for us to conform to “white normalcy” smothered like a snowdrift. By our fire, we talked of our worries that our tongues had shaped themselves around English words, rendering our mother tongues into an awkward dance.

On those languid nights by our fire, we sought the warmth and comfort found in our respective languages, trading words over heaping plates of food. Malai. I loved the way her eyes lit up when she says mmmmm, chatpato, her lips slightly smacking, after eating a delicious meal. I taught her Mandarin Chinese basics—a character, Pinyin, a number corresponding to one of the four tones—and we practiced together. 茶, cha2, crescendos upwards. 米, mi3, comes down and up like a bouncing ball. I knew she cared to get it right, and the thought warmed me more than the fire that gently toasted my cheeks and hands.

Still, the cultural landscape we grew up in took its toll, and sometimes we slipped into talking about food with an affect we dubbed “Bon Appetit syndrome:” converting names of our favorite dishes into white-palatable vernacular, seasoned generously with French terminology or comparisons to Western food.

One night, as we munched crackers around the fire, Elisha told me about how she made curry and slipped naturally into “Bon Appetit speak”. Saute the garlic, the ginger, the cumin, other spices, add tomatoes, masala, simmer until this juice comes out-

Call it what it is, I interjected. No more Bon Appetit translations. Rus is the warm, liquid flavor that soaks into rice or naan, so that the flavors linger on the tongue;  三鲜饺子 (san1xian1jiao3zi4) is what we dip together in a small bowl of soy sauce and vinegar, feeling the sharp tanginess meld with the light flavors of fresh cut chives, shrimp, and eggs.

When I sat with my best friend by our fire, laughing and chatting late into the night, we required no italics, no footnotes, no translations.

To the white Americans I grew up with, non-white culture boiled down to a few dishes and some words: a piece of flatbread, a dark lumpy sauce, a few strange phrases, some flowing strokes dashed across a page.

Even after Elisha and I split off to Boston and New York for college; even as the days grew longer, and the sky darkened early; even when rain drenched the ground, and I could tell the fallen sticks would be too wet to set alight, I daydreamed about our fire. I imagined I could smell the lingering scent of charcoal woven into the threads of my favorite jackets. At South Asian restaurants, I scooped rice and curry with three fingers, and pushed with my thumb.

To the white Americans I grew up with, non-white culture boiled down to a few dishes and some words: a piece of flatbread, a dark lumpy sauce, a few strange phrases, some flowing strokes dashed across a page. Items, objects, seasonings sprinkled lightly to spice up “normal” life.

Thankfully, Elisha and I did not pick up this way of objectifying someone different, and treated each other as people, as friends. The way we learned about each other was not an exchange, one item bartered for another, economic and impersonal. We learned the unique intersection of history and experience that brought us both to this town at this time, and the colorful cultures that spring up as a result. We knew how to listen to the unfamiliar, to savor the new, to appreciate each other and ourselves. And most of all, we prized the precious time we spent together, the hours that melted away as we laughed and told stories underneath a starry sky.

Though the fire itself may be gone, memories of its warmth still draws us together like two glowing sparks, connecting us closer than ever before. I feel it during our video call noodle parties, where we both down two packs of ramen in one sitting; through the constant barrage of menus and food pictures we spam each other with; during long, late conversations on culture, language, politics, food. The loving warmth of intimacy, understanding, confidence that first started on those summer evenings. A friendship sealed in flame.

Julia Tong is a cat enthusiast, dumpling appreciator, story lover, and a senior at Barnard College. She has also written for the Columbia Spectator, AsAmNews, Geek Vibes Nation, A Place to Hang Your Cape, and more. Find her on Twitter @julia_tong7 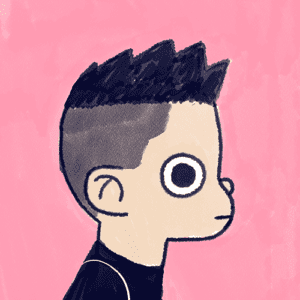 Ken Wong is an artist and game developer based in Australia 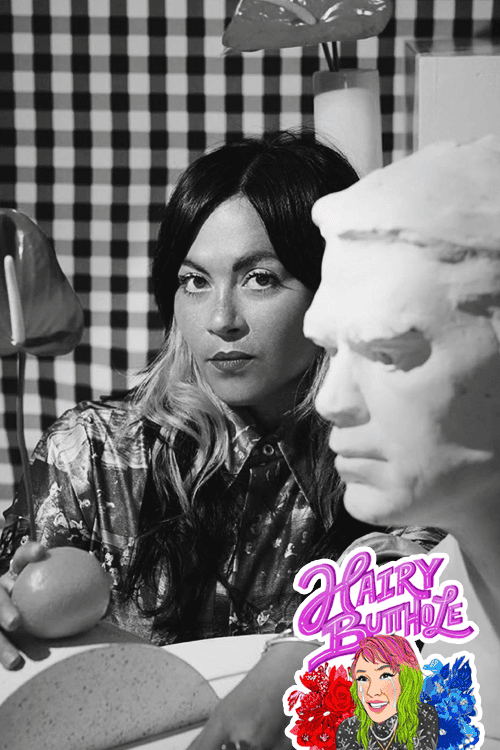 How do you repair a friendship after ‘breaking up?’