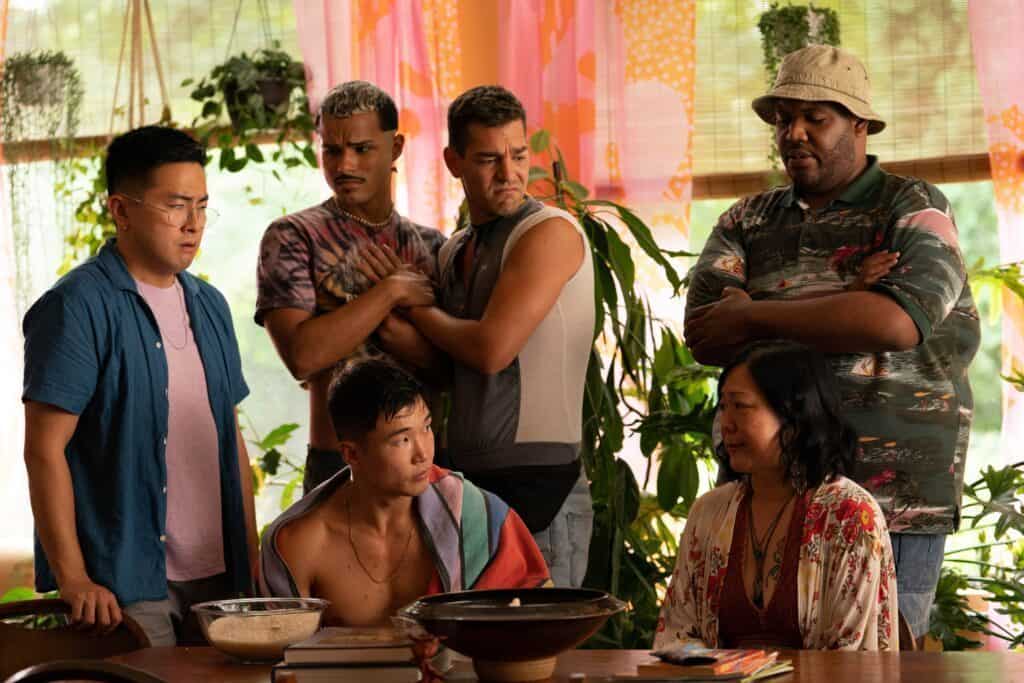 The raucous romp of a rom com Fire Island may seem like a departure for Andrew Ahn—known for directing thoughtful, naturalistic indie dramas like Driveways and Spa Night—but the rollicking Pride and Prejudice revamp fits perfectly within his repertoire.

Ahn’s three aforementioned features, as well as the two short films that preceded them, all orbit his identity as a queer Korean American, even though, as he informed me over a video call last week, pouring parts of himself into his art isn’t as simple to him (or even as desirable) as re-telling his own experiences. Some of his works seem autobiographical; his first short was titled Andy, while the protagonist in Spa Night shares his background as a closeted gay man born to Korean immigrant parents. Not all his films feature a recognizable proxy for Ahn himself, though they do present distinct extensions of Ahn’s outlook, and the dynamic portrait he paints of queer Asian America. His career, which began 13 years ago, has two distinct phases. His first phase—comprised of Andy, about a Korean American boy trying on lipstick at a mall, and Dol (First Birthday) about a young Korean American man coming out to his parents—continued with his 2016 feature debut Spa Night, about the closeted, college-aged son of Korean immigrants, torn between desire and duty. Each film in this phase hones in on the delicate friction between queerness and cultural identity—specifically, Korean American identity—and Ahn wrote each one himself.

However, after the success of Spa Night—which premiered at Sundance, before playing at festivals in South Korea, Australia, Brazil, and the Philippines—the ensuing spotlight took on the claustrophobic scrutiny of a microscope, turning much-needed visibility into discomfiting intrusion. In an interview with Filmmaker Magazine, he expressed that he will no longer only talk about being gay and Korean American after having to do so repeatedly while promoting his first feature. When I asked him about whether this was why his 2018 feature Driveways was his first to not explicitly examine the nexus between queerness and Korean American culture, he said yes.

“I think with a lot of first feature films, especially if they’re very personal, everybody wants to ask you about ‘you’ as the filmmaker,” he recalls. “And they want to know who ‘you’ are, and I just was so exhausted by it.” This exhaustion marked the beginning of the second phase of Ahn’s career, in which he began adapting other people’s scripts and stories instead. First came Driveways, a tender tale of grief and outsidership written by Hannah Bos and Paul Thureen, about a woman taking her young son to a small town in upstate New York to gather her late sister’s belongings. While Ahn may have felt the need to distance his next work from racial identity, it was in fact this very facet of the film that truly made the project sing. The mother-son duo were originally written to be white, but Ahn chose to cast Asian American performers Hong Chau and Lucas Jaye, a decision that not only unearths the film’s latent melancholy of listless isolation (the characters spend most of the film in an all-white suburb), but also imbues the story with a sense of bittersweet immigrant hopefulness. Neither their given names, Kathy and Cody, nor any lines of dialogue explicitly reference their ethnicity, and the world they occupy, for all its lingering tensions, doesn’t constantly demand that they justify their existence.

Kathy and Cody’s background are of a more nebulous (East) Asian American-ness, but Ahn’s approach to their outsider experience feels as deeply personal as when he tells stories about his specific background. This also carries over to Fire Island, featuring a group of gay best friends, and focused on Noah (Joel Kim Booster, also the film’s screenwriter) and Howie (SNL’s Bowen Yang), both Asian American, but whose performances are not centered on “being Asian.” The film also limits the mention of their ethnicity to a few specific instances of addressing sexual racism within the gay community, which prevents their characters from being wholly de-racialized without making their entire characterization embodiments of this issue. While this approach—in which identity blends smoothly with the background—may seem at odds with Ahn’s earlier films, the sympathetic intimacy with which he tells each story makes both approaches, the explicit and the implicit, feel like two sides of the same coin. All five of Ahn’s films are, in one way or another, about queerness and Asian Americans, but with each work, he advances the public’s literacy in regard to these identities within the American cinematic lexicon, never confining them to a box. This endeavor feels especially pertinent amidst the current wave of anti-Asian racism in the U.S. that compels many to rethink Asian American identity.

“I think it has a lot to do with the transitional state that ‘Asian America’ finds itself in right now, where to a certain extent we can exist in moments without having to worry about our Asian Americanness, but it still slaps us in the face when there are racially motivated, violent acts against us,” Ahn explains. “I think that I’m looking at Asian American-ness in a slightly different way with each film, kind of taking my cues from the characters and the situation that they find themselves in, and I think that that’s indicative of the many different ways that we as Asian Americans experience the world. It’s never consistent.”

Through moments of pregnant silence and introspection in his films, Ahn conveys multifaceted portraits of Asian American-ness across his films, as distinct individuals move through the world on their own paths.

To make sense of the world we all occupy, Ahn is drawn to exploring it through rituals, whether in the form of long-held Korean ceremonies such as the doljanchi—which appears in both Dol (First Birthday) as well as Spa Night—or American rites of quiet grieving, or even the cinematic practice of constantly re-adapting Jane Austen’s novels. It is his constant drive to find his own place within larger rituals that lead to delightful results like remapping the classic romance of Pride and Prejudice to the modern gay rituals of Fire Island getaways. Ahn and Booster boldly re-frame who belongs within those rituals, and who is allowed to take charge of them, a metaphor upon the identity negotiations of Asian Americans at large.

“As the child of immigrants, I think of cultural ritual as a very fixed idea, and tradition feels very fixed, and as a queer person I feel like I butt up against that,” he says. “In reality, maybe [culture] can evolve to include queer people in a way that, right now, it doesn’t necessarily. And that’s really interesting to me. I love that idea, and in some ways it connects to Fire Island as well, that you can take something that feels sacred but you can modernize it, you can queer it, and it still holds the spirit of the original.” As for what Ahn hopes to do next, he says a return to a more specifically Korean American tale might be on the cards. But whether or not he chooses to draw from the well of his own experiences, the result is likely to be as personal and transformative as any of his films, and continue to expand what it means to be queer and Asian American on-screen. Our Favorite Music Videos That Pop

These AA+PI artists may have different musical styles, but they understood the assignment to create popular music