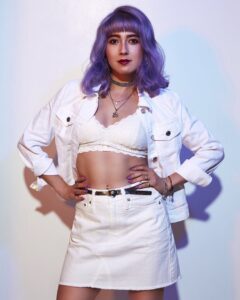 Extravagance, drama, and money… loads of it. Bling Empire season 2 is back, and so is our hāfu queen, Anna Shay.

An heiress whose wealth comes from her family’s defense technology and arms company, something many might find controversial, Anna is a woman with lavish taste and a flair for the eccentric, though also surprisingly soft-spoken and shy.

As we prepped for the interview, Anna was nothing but complimentary and super excited to find all four of us are of mixed Japanese heritage. It was a pleasure speaking with her and worth the wait to see firsthand how a sense of adventure and being true to oneself is so important to her.

What was it like growing up in Japan and then transitioning to Los Angeles? Did you have any challenging times?

I don't think I really knew the difference when we moved from there to here. I went to an international school. My father is American, but his parents immigrated from Russia. My mom was Japanese and a quarter Russian, actually.

Wow, what a beautiful mix. Did you ever feel that you have any pressure to prove your Asian-ness?

I don't think I have. I think that when people put themselves into a category they're putting themselves into those categories. They're cutting themselves off from anything that they can venture into in this great big world. I think the best thing is just to grow up and know who you are. You're gonna make mistakes. You may not understand certain things, but I'm blessed to have the parents that I had. They taught me to know who you are to believe in yourself.

So, the being Asian, or half, really never really entered my life. I did see things that were a little odd. I’d be at school and I’d talk in Japanese with my mom. When my family moved from Japan, not many people here spoke a second language. So It's all how you look at things, right? Being able to speak Japanese was great. I love that. I wish that I spoke a second language. I only know a little French.

I've always said that once Asian Americans get a reality TV show, it'll mean that we've made it. How does it feel to be part of this groundbreaking show?

Exciting. But you know, my uncle — which I actually haven't said — was a very famous comedian in Japan.

Well, we would call him a nickname, but his name is… you know, how they do it backwards, right? Oizumi is the maiden name of my mom. So it’s Oizumi Akira. He was quite famous. He was like a Bob Hope to Japan.

Yeah, I never told anybody that. You heard it here first. Very cool. Do you have any favorite moments that you can share with us about season two of Bling Empire,

Favorite moments? The adventure. I believe that people have one life, and they sometimes hold back on so many things. Go out and do it. Believe in yourself that much that you do it.

You’re a woman of many talents: from managing a Cuban salsa band to training with the military and learning to fly a helicopter to becoming a licensed contractor.

No. I failed the test. I took a practice test online because somebody said, “Why don't you?” I thought, “This can't be that hard.” So I took the test.. Zero out of 10.  But I got all the legal questions. You know how they’re random? I had all the legal ones. I wanted all the super exciting questions, but I didn't get that!

What's next for you? What do you want to pursue next?

Well, my son and his family come first. For what I want to pursue… I believe that when you know, your heart will know and just go for it. How about with rappelling? What are you doing tomorrow?

What am I doing tomorrow?

We can start rappelling off a helicopter.

Let's do it. I would totally be down. That would be a lot of fun. Is there anything that you hope that audiences will learn about you from season two?

I think I've learned a lot from the audience, and I have to really thank them because… I know the joke is that I don't really understand Instagram. Yes. I really don't, but I'm trying. and It’s taken a while, which is ridiculous because it can't be that hard, but I do read. I want them to know I really read. As much as they say that I inspire them, I want to thank them because they inspire me.

That’s beautiful. A couple more questions. How do you stay so grounded with so much lavishness around you, with all this publicity now in your face?

Well, I'm very shy, you know. I really am. My father always protected us. How do I ground myself? I think about my parents and all the things that they have taught me in the most indirect way. It just stays with you. I could tell you stories and stories and stories.

Well, maybe we'll have to do another interview at another time. One more, final question. I love Paris. I know you love Paris. Favorite recommendations where to go in Paris?

Anything. What are your favorite things to eat, do, or see?

Some people really enjoy eating, and they take pictures and everything, but when I'm at my friend Florent’s, I think it’s the excitement of doing what it is at the moment. I can recommend Maison du Caviar, which is unbelievable. But the people… I think it's people. And when you get to know people, it's not all fashion week, and it’s not all showy. People are people wherever you go. And so I've been really, really fortunate to meet Florent, his family, his friends, and we just have dinners, and I go there and relax. We still have a home in Tokyo, so I used to go to Tokyo more often, but now it's like Paris or Italy.

I just got back from Rome. I love Italy.

You're jealous of me?

Yes! I love it. I love Italy. Every time I go, I almost get married. You know, this is my problem.

It was so lovely chatting with you. Thank you, and enjoy the party! This story was originally published on Mixed Asian Media in June 2022.

Alex Chester-Iwata is the Editor-in-Chief of Mixed Asian Media. She's a boba-drinking cat lady who loves to travel. When not running MAM you might catch her on TV.