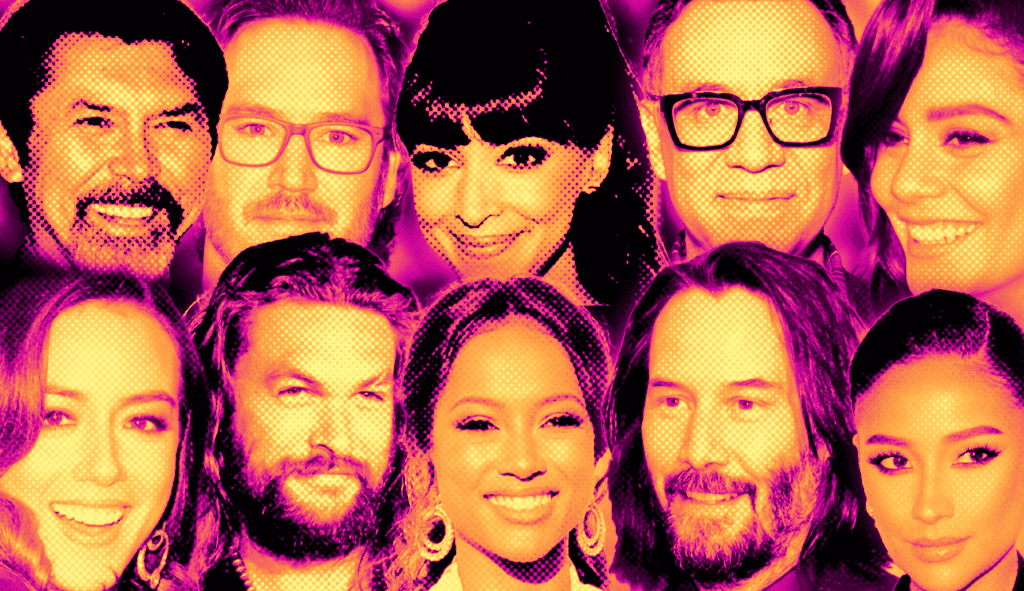 Asian American and Pacific Islander representation in Hollywood leaves a lot to be desired—and I’m not only saying that as a Millennial who grew up crushing on Tuxedo Mask from Sailor Moon because there were so few real hotties represented. But there are actually more actors of Asian descent in La La Land than you think—here are a few that you may not have identified as AA+PI: The fact that Keanu Reeves is AAPI isn’t exactly a secret. Since his early interviews, he’s described himself as the son of a Chinese-Hawaiian father and English mother. But it probably wasn’t until Ali Wong cast him (as a hilarious version of himself) in her 2019 Netflix rom-com, Always Be My Maybe—where she deliberately cast all Asian American men as her love interests—that the rest of the world woke up and realized that John Wick is part Asian and Pacific Islander. Best known as Daisy Johnson on ABC’s Marvel's Agents of S.H.I.E.L.D., Chloe Bennet is actually Chloe Wang, with a Chinese dad and white mom. When she became an actor, she didn’t have much luck auditioning under her real last name—she was often told she wasn’t white enough to be the lead and not Asian enough for other roles (problematic much?). And because Hollywood is racist, it wasn’t until she changed her last name and started using her dad’s first name (her way of still honoring him) that she began landing roles. That’s right, friends, Bayside’s favorite troublemaker is Asian—well, part. His mother is, as he once described on The Tonight Show, “this tiny little Indonesian woman,” and Zack Morris’s signature blond locks were “color by Clairol.” Though Gosselaar seems clearly excited talking about this in interviews, it would be nice if he (and Hollywood) acknowledged it more. If a generation of AAPI kids had known the star of Saved By the Bell was part Asian, it would’ve been a game changer. But alas, Gosselaar always plays a plain ol’ white guy. Even when he was on mixed-ish, which features a mixed-race family, he was still just a white dude! The first time Vanessa Hudgens has played a character who reflects her AAPI roots was in NBC’s short-lived Powerless. At one point on the superhero sitcom, the High School Musical alum mentions she’s half Filipina—it’s not a plot point or anything, it’s just something she brings up in the context of the conversation in the scene. In real life, the “Robert Downey Jr. of the Netflix Christmas Cinematic Universe” (it’s a thing!) is also half Filipina on her mother’s side and Irish, French and of Indigenous descent on her father’s side. Fred Armisen’s (born Fereydun Robert "Fred" Armisen) AAPI background is something straight out of a movie. Armisen’s paternal grandfather was a Japanese dancer, and when he went on Finding Your Roots, the actor visited an entire museum dedicated to the man, Masami Kuni. There, Armisen—known for his impressions on Saturday Night Live—learned his grandfather, too, performed as different characters. If that weren’t crazy enough, when he performed in Europe, Kuni worked for Nazi Germany during World War II, but he was actually a spy for Japan. The final—and biggest—plot twist is the fact that Kuni was actually born in South Korea. He adopted a Japanese name and persona in high school after the Massacre of Koreans in 1923. So after telling people for most of his life that he was a quarter Japanese, it turns out Armisen is actually a quarter Korean. As a teenager, Shay Mitchell (born Shannon Ashley Garcia Mitchell) dyed her hair blond and wore colored contacts to lighten her eyes. This was because the Canadian actress, best known for her role as Emily Fields on Pretty Little Liars, didn’t want to look like herself. It wasn’t until she left her hometown and traveled the world that Mitchell started embracing her Filipino roots (on her mom’s side). Also, one of Mitchell’s first cousins, once removed, just happens to be the legendary Lea Salonga. Personally, if I were related to the woman who provided the singing voices for not one, but two Disney princesses (Jasmine and Mulan), I would definitely let people know. When Jason Momoa got the role of Arthur Curry/Aquaman for 2017’s Justice League and the following year’s Aquaman, he shared his excitement about being the first mixed-race superhero (he’s Native Hawaiian on his father’s side and German, Irish and of Indigenous descent on his mother’s side). Technically, he’s not the first (for example, Dean Cain, who played Superman in Lois & Clark: The New Adventures of Superman in the mid 1990s is a quarter Japanese). But Momoa is certainly the first to really celebrate his mixed heritage. And it’s that mixed background that helped him relate to Arthur Curry, who also comes from two very different cultures (Atlantean and surface dweller). Born in London to an Indian father and a British mother of German, Italian and Greek Cypriot descent, Hannah Simone grew up in London, India and Canada. For anyone who’s watched New Girl, Simone’s background won’t come as a surprise. Her character Cece Parekh is Indian American and even incorporates elements of her heritage in her wedding. This being said, Simone has described her dad as “the most American dad in the world” who “happens to be South Asian.” Whereas her British mom “loved India so much she married an Indian man and now has Indian children. See how she made that work for her?” Having played roles such as Mexican American singer/songwriter Ritchie Valens in La Bamba and one of the trapped Chilean miners in The 33, it’s easy to assume that Lou Diamond Phillips is Latinx. But Phillips is actually Filipino and Southeast Asian on his mother’s side and spent part of his childhood in the Philippines. Despite starting out as part of a comedy troupe, Phillips has since perfected his badass face and as a result, as he tells Conan O’Brien, Hollywood considers him “The Brooding Ethnic.” Acting was never on the list of things Karrueche Tran wanted to be when she grew up—which included hairdresser, manicurist and restaurant owner. But when you look at her role in Claws, which was written as a half-Vietnamese stripper-turned-manicurist-turned-murderess, it was like the role was made for her (minus the stripper and murderess parts). Born in Los Angeles, Tran is the daughter of a Vietnamese mother and Black father. She was raised by her mother and Jamaican godmother, and has said it was difficult growing up and trying to figure out which culture she identified with, but now she feels both Asian and Black.

Not-so-hidden Asian and Pacific Islander actors are not limited to North America. Here are a few actors from around the world who you may or may not know are API. Yup. Princess Jasmine herself is half Asian—though, I guess it makes sense since the love of Aladdin’s life is supposed to be brown, like him. In this case, Indian (Naomi Scott has even said certain elements of Aladdin were inspired by Bollywood films). Scott is the proud daughter of an Indian mother and English father—you can often find her celebrating her heritage on social media—and grew up in North East London. Ben Kingsley is half Indian (his father’s side) and half English, which makes him playing Mohandas Gandhi in Gandhi, less problematic and white-washy. In fact, Kingsley’s father was Gujarati Indian, the same ethnicity as Gandhi. Kingsley was born Krishna Pandit Bhanji but anglicized his name when he started acting because, you know, racism. He’s noted that once he changed his name, he started booking roles right away. With his Māori background on his father’s side, New Zealander Taika Waititi is the PI half of API. Waititi is an actor—he played Hitler as a boy’s imaginary friend in Jojo Rabbit—but he’s possibly better known as a director, with credits including Thor: Ragnarok and Thor: Love and Thunder. In 2020, he won the Oscar for Best Adapted Screenplay for Jojo Rabbit, becoming the first Indigenous person to be nominated for and win in that category. Miss America’s Emma Broyles: A Queen of Many Firsts