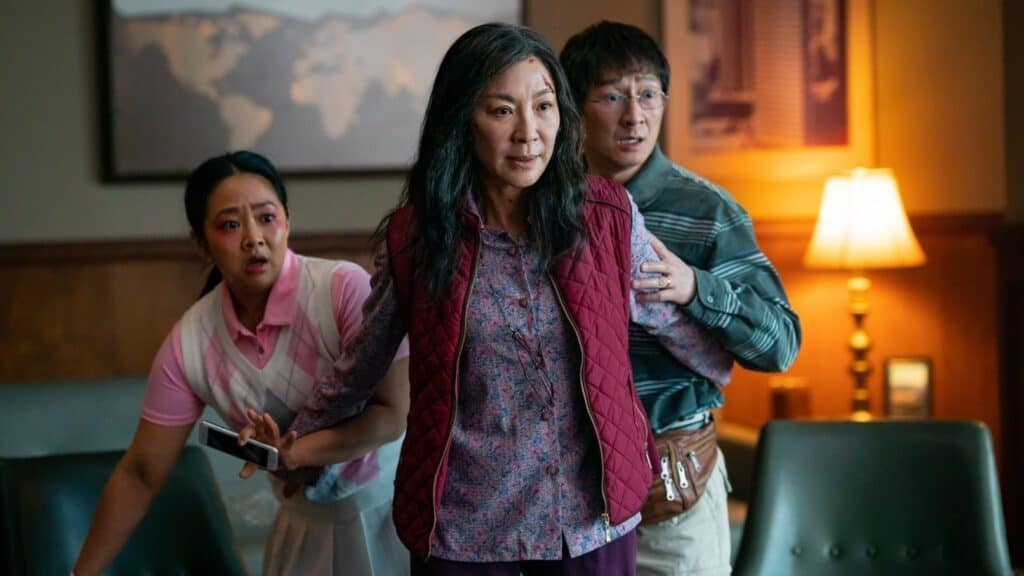 From left, Stephanie Hsu, Michelle Yeoh and Ke Huy Quan as the Wang family in “Everything Everywhere All at Once.”

On Tuesday, the Academy of Motion Picture Arts and Sciences unveiled their nominees, with the winners of the 95th Oscars set to be announced on March 12. The results were as most entertainment pundits had predicted, with only a handful of surprises, but what makes this year’s lineup stand out is its unprecedented number of Asian actors: a total of four, in three of the four acting categories. Granted, it can be dispiriting to realize that a mere one in five acting nominees is still “unprecedented,” but the Academy’s recognition of Asian talent and stories this year extends well beyond the acting branch. In fact, the most nominated film this year (with 11 nods total, including Best Picture) is Everything Everywhere All At Once, a surprise box office success which some have also discussed as a leap forward for Asian American representation.

As with any movement on the front lines of representation, some deserving talents were left out as well, as these things often go. No award lineup can please everyone, but the pendulum always seems to swing in disappointing ways. It is, therefore, understandable that people might still clamor for more, even in a landmark year, when recognition so often feels finite. The 2020 ceremony saw South Korean thriller Parasite pick up four major awards including Best Picture, but neither that film, nor any film released that year, saw a single Asian acting nominee. The following year, two men of Asian ethnicities were nominated for Best Actor, Riz Ahmed for The Sound of Metal and Steven Yeun for Minari, and South Korean actress Youn Yuh-jung even won Best Supporting Actress for the latter.

Unfortunately, that number dropped back down to zero Asian actors out of 20 just last year (only one acting nominee, Harriet’s Cynthia Erivo, wasn’t white). Things were significantly better for Asian performers this year, even though Black actors only saw two nominations—Angela Bassett in Black Panther: Wakanda Forever and Brian Tyree Henry in Causeway—despite actresses like Keke Palmer, Danielle Deadwyler and Janelle Monae giving highly acclaimed performances in Nope, Till, and Glass Onion. For those keeping track, it’s now been eight years since the first #OscarsSoWhite campaign was launched online, and some argue that this is still very much the case. 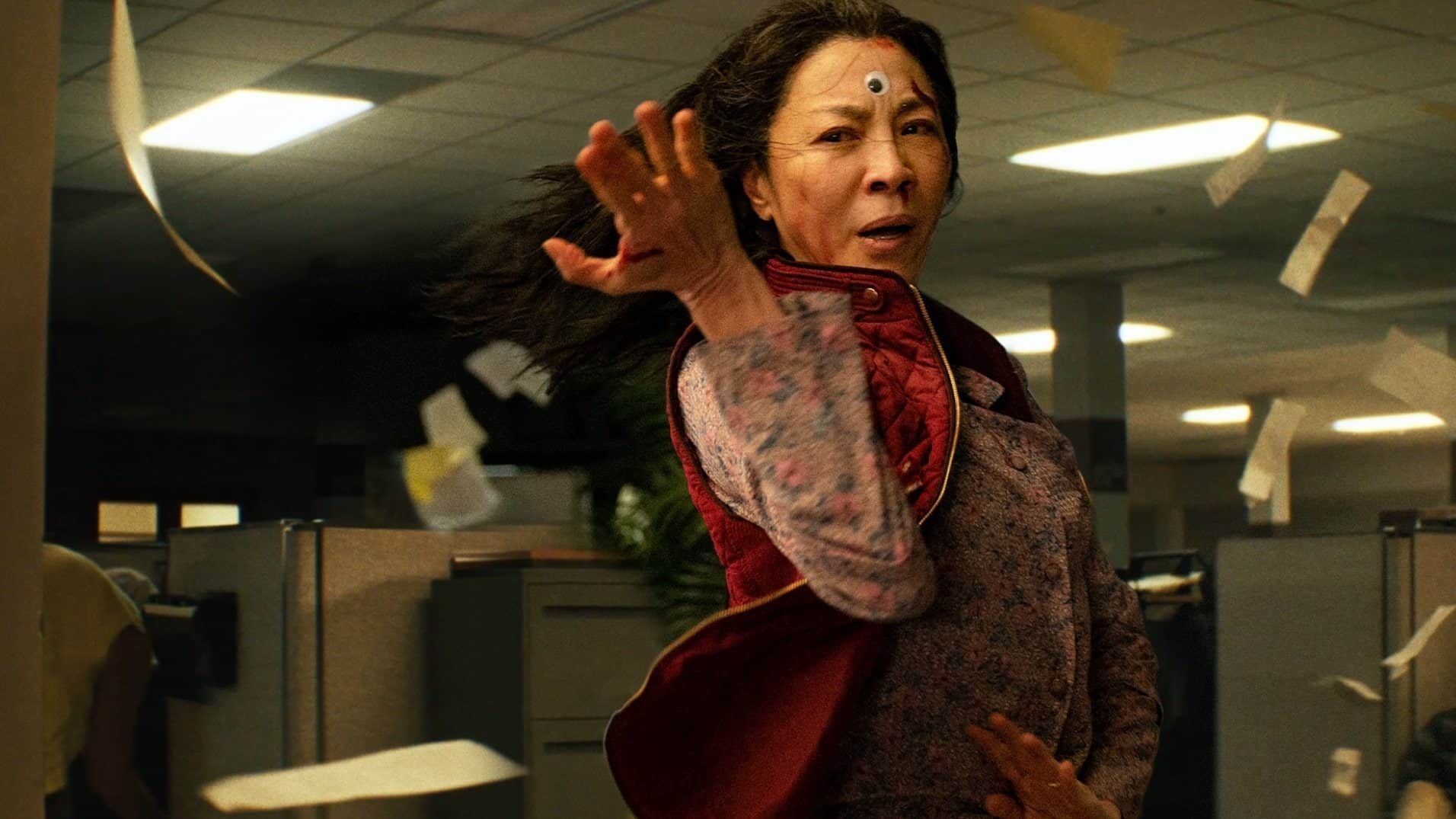 Michelle Yeoh as Evelyn Wang in “Everything Everywhere All at Once,” with her third eye.

On the flip side, Malaysian legend Michelle Yeoh, who rose to prominence in Hong Kong action films, was nominated for Best Actress for Everything Everywhere All At Once, making her only the second Asian actress in history to be recognized in the leading category. The first was Merle Oberon, who was nominated for her role in The Dark Angel in 1936—a full 87 years ago—but Yeoh’s long overdue recognition also brings up complications for these many “firsts.” Oberon had long hidden her South Asian and Māori heritage; as far as anyone in Hollywood was aware, she was white, giving Yeoh the strange distinction of being the first time the Academy has knowingly nominated an Asian leading actress (or, as The Hollywood Reporter awkwardly puts, the first actress who “identifies as Asian”). There are also discussions about whether Steven Yeun should be recognized as the first Asian American nominated for Best Actor, given Yul Brynner’s part-Buryat ancestry (he won the award for The King and I in 1956), but debating these many “firsts” for Asian performers, nearly 100 years into the Academy’s history, feels like its own indication that this kind of progress is not only overdue, but still in its infancy. 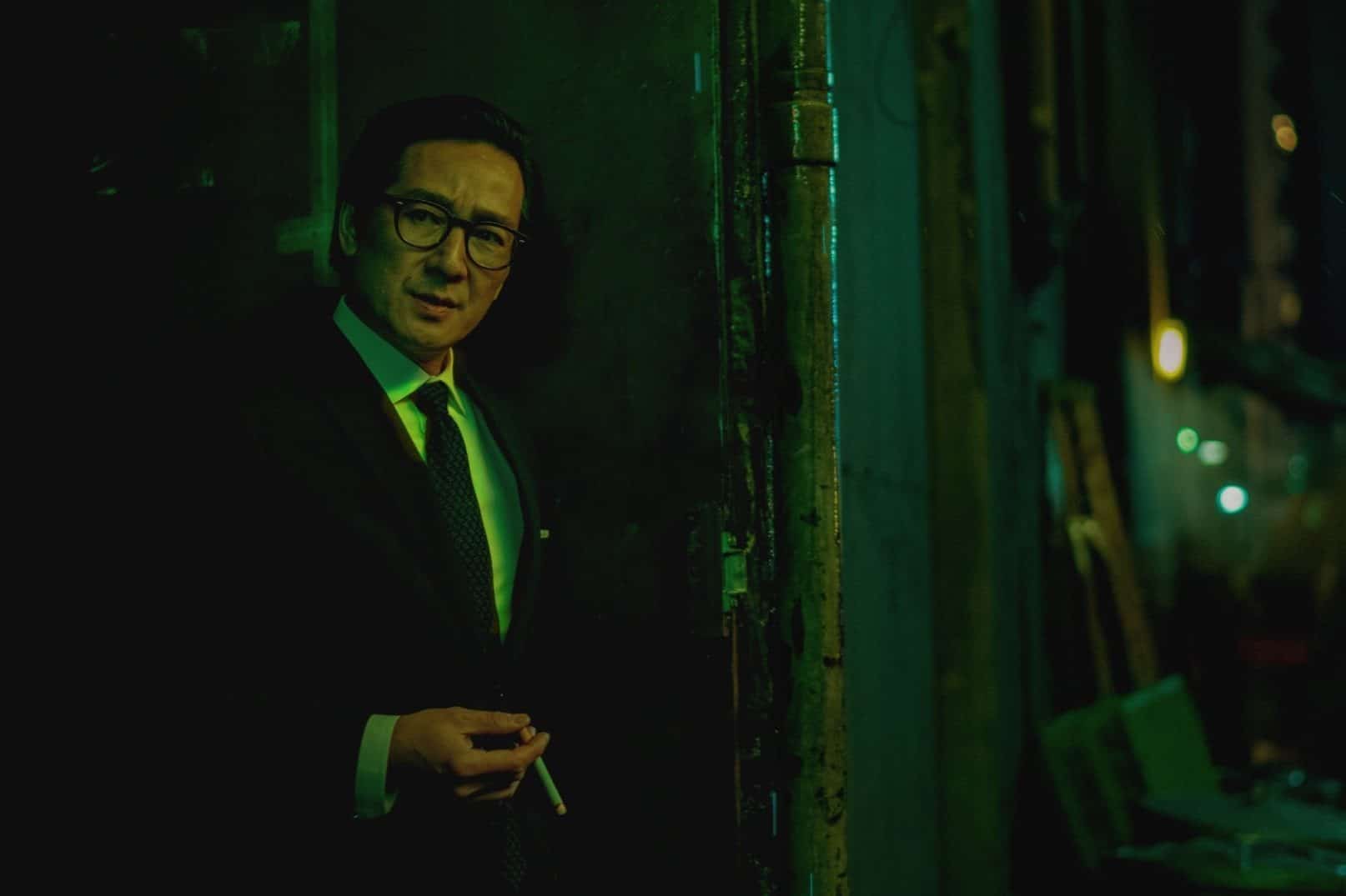 Ke Huy Quan as Waymond Wang in the Wong Kar-Wei universe in “Everything Everywhere All at Once.”

Comeback king Ke Huy Quan (Indiana Jones and the Temple of Doom) was nominated for Best Supporting Actor in Everything Everywhere (if he wins, he’ll be only the second Asian to win in this category, after Cambodian actor Haing S. Ngor in 1985 for The Killing Fields), while the ever-reliable Hong Chau received a Best Supporting Actress nod for The Whale, as did Everything Everywhere’s Stephanie Hsu (alongside her co-star, Jamie Lee Curtis). Though many felt that Filipina supporting actress Dolly de Leon missed out on the same recognition, despite being just as deserving for her fearsome performance, and despite her movie Triangle of Sadness racking up nominations for Best Picture, Director, and Screenplay. 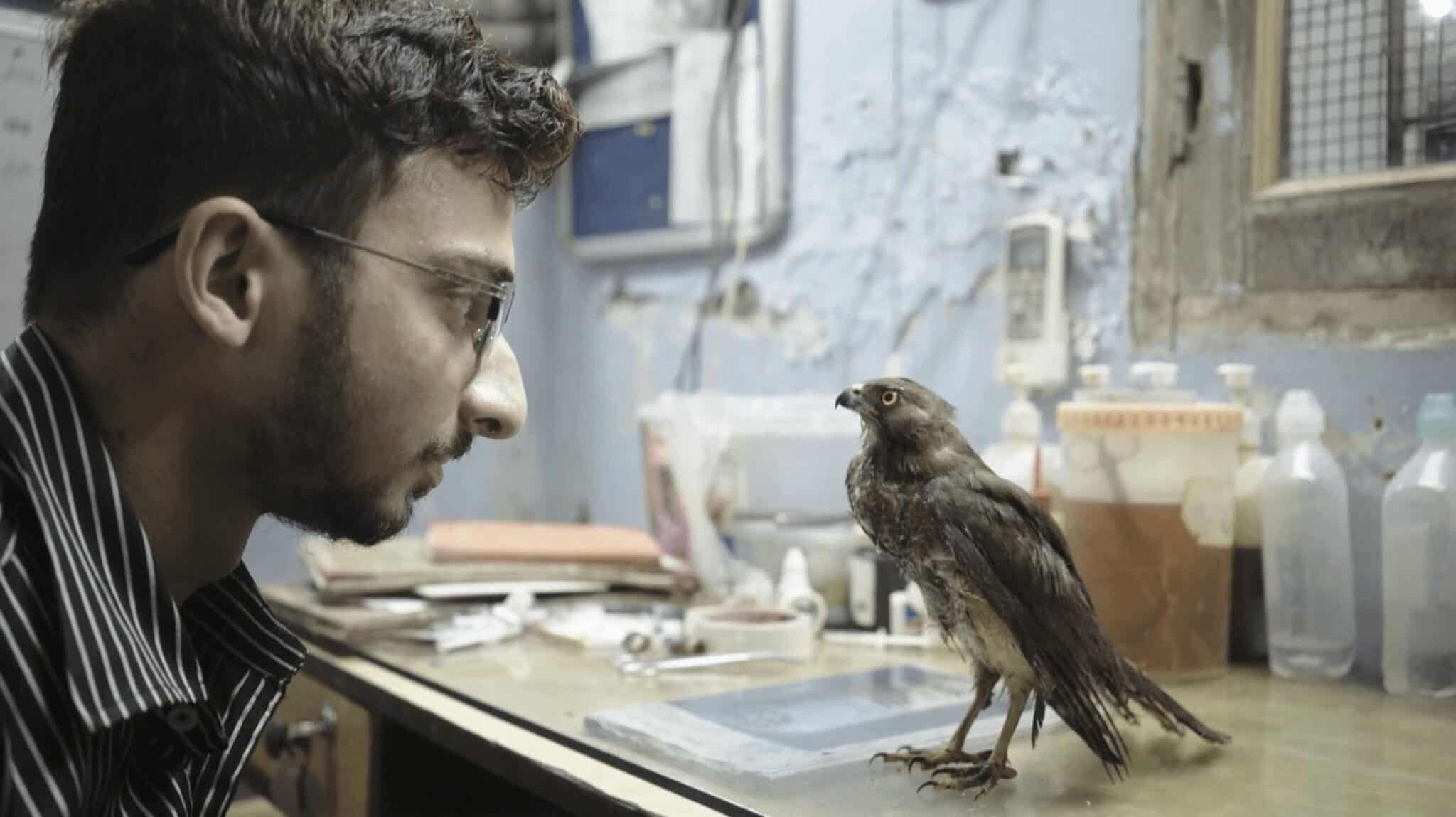 It was also a good year for Indian films. Tollywood breakout RRR landed a Best Original Song nomination for composer M.M. Keeravani and lyricist Chandrabose, for their rip-roaring musical number “Naatu Naatu”—a first for an Indian movie, despite the country’s long history of musicals. Meanwhile, Shaunak Sen’s environmentalist portrait All That Breathes and Kartiki Gonsalves’s The Elephant Whisperers were nominated for Best Documentary Feature and Best Documentary Short Subject respectively. The lack of any other nods for RRR, while unfortunately expected, did lead many to question why it was left out of major categories (since it’s seen unprecedented success for an Indian movie in the west), with some even decrying its lack of a Best International Feature Film nomination.

RRR wasn’t actually eligible for the aforementioned category, since each country selects its own entry, and India chose to send the sentimental Gujarati-language filmmaker autobiography Last Film Show. The latter wasn’t nominated either; in fact, no Asian films were nominated for Best International Feature at all, despite several notable ones being featured on the shortlist. These were Pakistan’s Joyland, Cambodia’s Return to Seoul, and South Korea’s Decision to Leave, which was shut out of the awards lineup entirely, despite being a major favorite. Park Hae-il and Tang Wei in “Decision to Leave.”

However, a quick glance at the list of this year’s nominees reveals a large number of Asian, AA+PI and other Asian diaspora talent, so there’s still plenty to celebrate, with Asian films and artists showing up in 17 of the Oscars’ 23 categories. Everything Everywhere’s 11 nominations come in the Best Picture, Director, Original Screenplay, Actress, Supporting Actress, Supporting Actor, Original Score, Original Song, Costume Design and Film Editing categories, making it one of the most nominated films of the last decade (tied with Joker, and behind only The Revenant, La La Land, The Power of the Dog, and The Shape of Water). In yet another first, Daniel Kwan—who was nominated in the Picture, Director and Screenplay categories alongside partner Daniel Scheinert —becomes the only Asian American to receive three nominations in the same year, and only the third Asian artist ever to do so, behind Bong Joon-ho’s three nominations for Parasite, and Chloé Zhao’s four nominations for Nomadland.

Everything Everywhere’s nominated Asian talent also includes producer Jonathan Wang, costume designer Shirley Kurata, two members of composing trio Son Lux (made up of Ryan Lott, Rafiq Bhatia and Ian Chang), and one of the composers of its nominated song “This is a Life,” which is credited to Lott, David Byrne, and Japanese American singer Mitski. 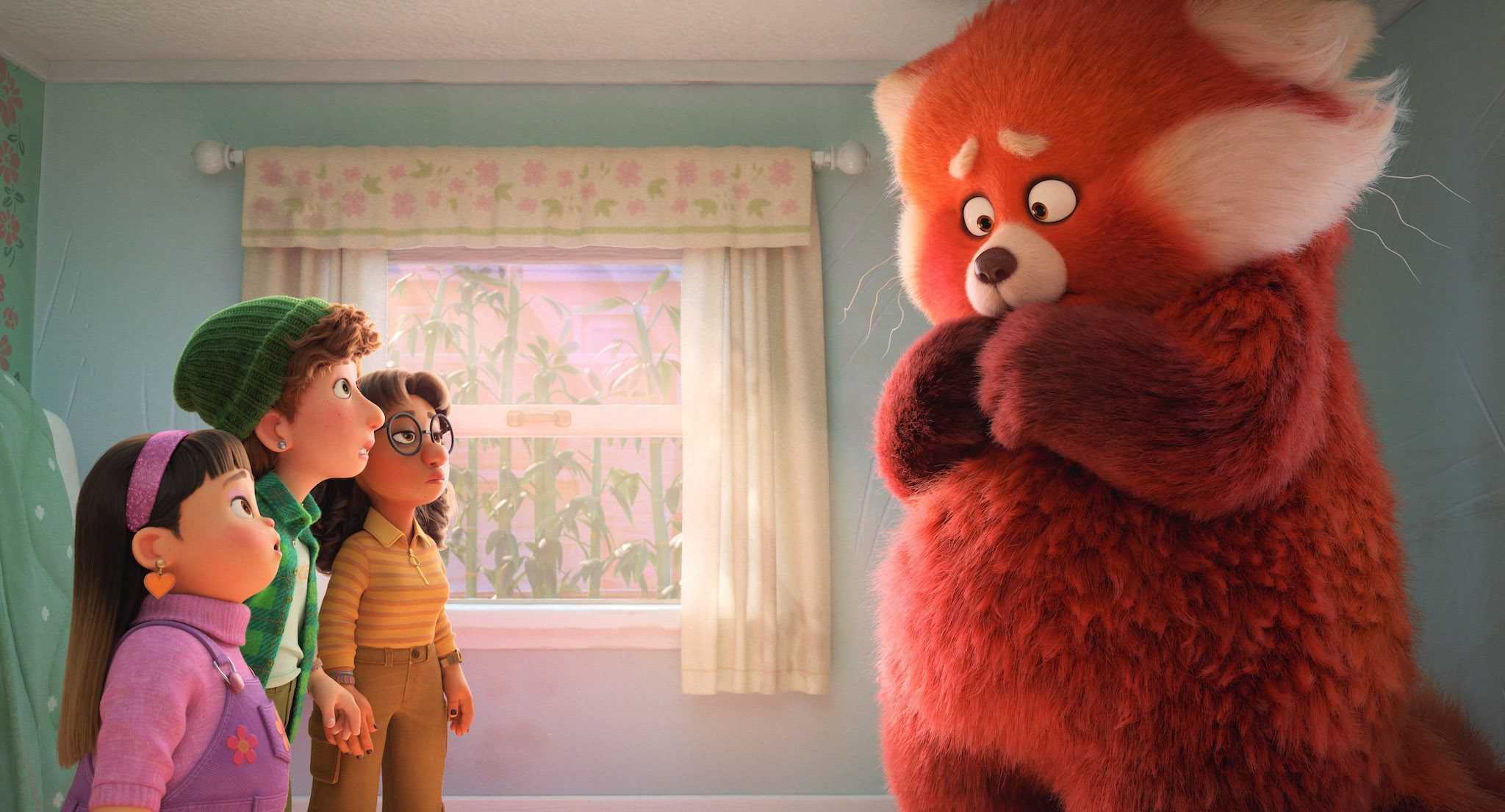 “Turning Red” was nominated for an Oscar, in the Best Animated Feature Film category.

Stepping outside the Everything Everywhere bagel, you also have the movie Living—a British remake of Akira Kurosawa’s Ikiru—whose Best Adapted Screenplay nomination recognizes the British Japanese screenwriter Sir Kazuo Ishiguro. Judy Chin was nominated for Best Makeup and Hairstyling for The Whale, alongside her teammates Adrien Morot and Anne Marie Bradley. Domee Shi’s delightful Pixar production Turning Red appears in the Best Animated Feature Film category (proving the Daniels don’t have a monopoly on intergenerational Asian American trauma!) while artists of Iranian origin also showed up in a couple of categories: Luxembourg-based Cyrus Neshvad for The Red Suitcase in Best Live Action Short Film, and the Iranian-French master of light and shadow, Darius Khondji, whose work on Bardo, False Chronicle of a Handful of Truths nabbed him his second Cinematography nomination (his first since 1996).

Of course, the next threshold to cross would be a large number of Asian winners, so there’s much to look forward to at this year’s ceremony. With Everything Everywhere All At Once being a major frontrunner (especially for Best Supporting Actor, since Ke Huy Quan has won practically every major award this season), it certainly looks like it could happen. However, a sign of more sustainable change might be several consecutive years where a diverse lineup of artists and artistry is the norm, rather than an oddity that runs the risk of nearly disappearing the following year. In other words, we’ll truly celebrate once articles like this one no longer feel necessary—but either way, the last year in movies has clearly provided plenty of Asian and AA+PI talent whose work is worth catching up on. 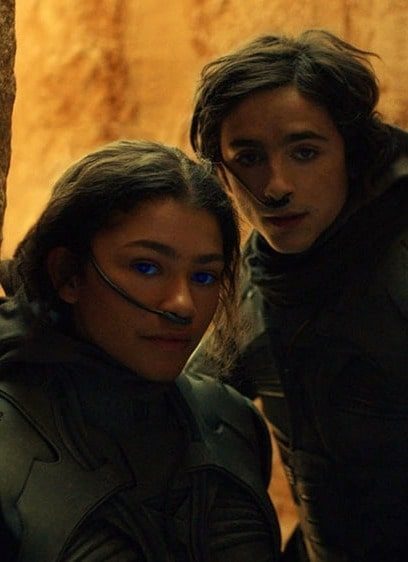